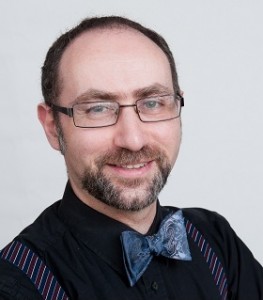 Daniel is an evangelist for useful standards and good practice. He delivers considered and pragmatic advice on the implementation of information assurance, security and governance…particularly in the world of standards (ISO/IEC 27001 is a speciality). His research with the University of Manchester – where he’s a visiting academic in IT Governance and Computer/Network Security – has led to a method for detecting the human vulnerabilities in networks. He began his career as a technical author and has never really stopped…no matter how many pre- and post- nominals he’s toyed with.

His PhD is A study of standards and the mitigation of risk in information systems. Daniel is director of research at the E RADAR community for effective on-line business. Daniel’s current research programme includes projects balancing technical security controls with human factors, using information security maturity to model security economics, security metrics, IT strategy, and the ‘dark net’. Daniel’s ‘firsts’ include co-author and moderator of the Technology Strategy Board supported scheme IASME, chair of the North West England Branch of the Institute of Information Security Professionals, architect of DTI’s Towards Software Excellence programme, creating the core of the original SANS training for BS 7799, editing the UK’s first national security breaches survey at NCC, and writing the first international standards for source code escrow. He has contributed to books, conferences, and appears on the BBC to warn the wider community about the risks and opportunities of information systems.

When not securing information, Daniel works for the security of his children and his parents’ honour. Personal interests range from Jewish tradition to science fiction. His knowledge of Doctor Who lore is tiring; he’s been graphic artist for the Blake’s 7 Appreciation Society which just goes to show…

“Consummate analogist and master of the transferred epithet, Douglas Adams showed that the nails of seriousness can be knocked in with the hammer of familiarity. The constant ‘what iffing’ of academics holds the attention of Radio 4 listeners until the kettle boils but never holds water with the bloke on the Clapham omnibus. The Analogies Project is one of those ‘I wish I’d thought of that ideas’, not least because it makes tangible contributions to increasing the understanding of the security challenge. It is not just another group therapy session for consultants…”