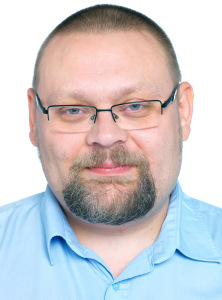 Paul is an Information Security Consultant at Network Rail, offering guidance to projects and colleagues alike. He studied English Literature at University, and after working in a number of jobs with varying degrees of success, he entered the IT Industry. Here he worked happily in a variety of support roles  until discovering the world of Information Security, where he now resides.

Having enjoyed aspects of Information Security in previous roles, he moved across formally, gaining his CISSP in the process.

He now has an active involvement in the security awareness of his colleagues amongst other duties. He enjoys this for a number of reasons, primarily for the chance to explain concepts in accessible language to people who may not have seen a personal relevance beforehand, and hopefully to encourage genuine interest afterwards.

“Having delivered awareness training to a broad spectrum of colleagues, I believe that promoting Information Security concepts can be both enjoyable and rewarding for those involved. In my experience, people who understand the direct relevance for themselves at work and home take the most away from the subject. After discovering more about the Analogies Project in the recent ISF Conference in Copenhagen, it became apparent that becoming involved would  give the opportunity to combine areas of personal interest, as well as passing on the message in a unique and fun way.”

Rumpelstiltskin – A Lesson in Password Security The Wolf, the She-Goat and the Kid The Sheep Biter – Insider Threat in Fable
Share This Post On
Contribute To The Project