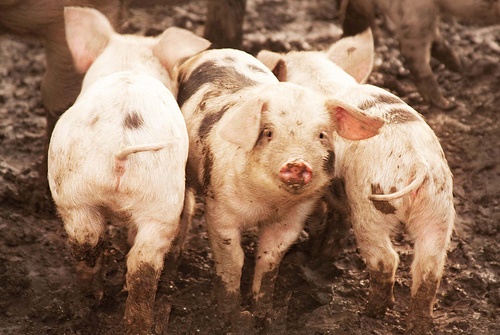 By the time that the other little pigs heard the terrible news, the sales calls had already begun.  “Our product is the silver bullet for wolf risks!,” cried one vendor.  “Our straw safehouse only failed because it wasn’t properly maintained, and as it’s close to our financial year end I can offer-” tried one valiant salesman, before the phone was slammed down.

The two remaining pigs arranged to meet up that afternoon, and chose a discreet vegan café to discuss how to stop the wolf from striking again.

Bob, worried about the security of his house made out of sticks, spoke first.  “This is terrible!  Poor Alan was so sure of his straw castle.  How do I know whether my wooden house is going to stop the wolf from eating me?”  His trotters rattled nervously against the wooden floorboards as he spoke, and his eyes glanced from patron to patron as if the wolf was about to finish his wheatgrass infusion and pounce upon them as he burst from his hipster disguise.

Charlie, struggling not to say “I told you so” about using flimsy stick walls compared to bricks which had been independently certified to a trusted standard, sipped his coffee.  “We can go through some steps to make your house safer from the wolf, if you like, but putting extra security in place is likely to cost you some money – or you might need to change the way you live.”

Panicked, Bob sputtered into his skinny soy latte.  “I can’t afford to do anything, I’m sure, not after I spent everything on the hot tub.  They told me the stick walls would make me compliant!  And anyway, maybe the wolf’s not hungry anymore.  Maybe he’ll move onto someone else now, rather than go after the two of us – he should be eating a balanced diet, and we’re so salty.  Maybe I won’t need to do anything and he just won’t bother me.”  He nodded, increasingly sure of himself.

Charlie sighed.  “Bob, look at me.  Firstly, ‘compliant’ is not ‘secure’.  Secondly, we’re made of BACON.  We’re so delicious, we have to hide in vegan restaurants to avoid the staff salivating on our tablecloth.  Of course he’s coming after us.  We just need to look at what the risk is, how well you’re currently protected, and what sensible steps we can take to make you safer.”

Noticing with approval that Bob was now giving him full attention, Charlie took a piece of paper from his pocket and unfolded it onto the table as he continued.  “It’s overwhelmingly likely that the wolf is going to come after us, and since your house is the one that looks the most fragile it’s likely that he’ll come to you first.  The risk is that the wolf exploits the fact that you made your house out of sticks, and blows it down like he did with Alan’s straw castle.  The impact on you of the wolf blowing your house down is obviously pretty big, as Alan found out.”

The two pigs gulped in unison.

“Now,” continued Charlie, “that puts the current level of risk right here.”  He moved a complimentary chocolate to the top right-hand corner of the unfolded chart, an area coloured in red and marked ‘high likelihood/high impact’.  “Normally we’d have the options of accepting the risk as it is, reducing it by putting extra controls in place, transferring it to someone else, or avoiding it entirely.”

“We obviously can’t just accept the risk of the wolf eating us,” Charlie said quickly to forestall Bob’s panicked flailing.  “And transferring it to someone else normally means taking out insurance, which wouldn’t really help you after the wolf arrives.  So we’re left with reducing it until you’re comfortable living in your house of sticks, or avoiding it by moving you into my house until the wolf goes away.”

“I’m penniless!” wailed Bob, making the barista edge closer to the table with their bill.  “I can’t afford alarms and locks and bricks and guards!”

“How about a free early warning system – neighbourhood watch?  You could put up a fence which is far enough from your house that he wouldn’t be able to huff and puff at your sticks without having to find a way past it.”  Charlie moved the chocolate down the “likelihood” axis as he spoke until it rested in the orange ‘medium’ range.   “You could build a secure room to hold your valuables and for you to hide in, and then it doesn’t matter if he blows the rest of your house down.  You could wear a hard hat so that you wouldn’t be hurt by falling sticks, and invite friends over so that you have strength in numbers if he manages to blow his way in,” he expanded, moving the chocolate down the ‘impact’ axis to the medium range.

“That’s probably the best you can do.  Would you feel comfortable living there with that level of risk?”

Bob shook his head vigorously.  “Even after making all of those changes, I’d still be terrified with that level of risk.”

“Then the only choice left is to avoid the risk of the wolf blowing down your house of sticks – you’ll move in with me in my brick house.”

Charlie moved the chocolate to the ‘low’ level on the likelihood scale.  “I’ve had my walls tested by trumpeting elephants that weren’t able to penetrate them, and I make sure that the plaster is promptly patched within days of a vulnerability being identified.  I share information with Little Red Riding Hood to make sure I’m acting on the latest information about wolf risks, and I learned a lot about wolves and social engineering from a mother goat and her seven kids which I’ve used to train the security guards.”

He pushed the chocolate down the ‘impact’ level with a sweep of a trotter.  “If he does turn up and start puffing, I have a secure room which holds all of my sensitive assets, and a continuity plan which means that we can trot off to a secure backup location if the walls start shaking in the main house.”

He nodded approvingly at the position of the chocolate, now sat at the upper edge of the ‘low’ area of the chart.  “I can live with that.  And you should see what’s waiting for him if he tries the chimney.”