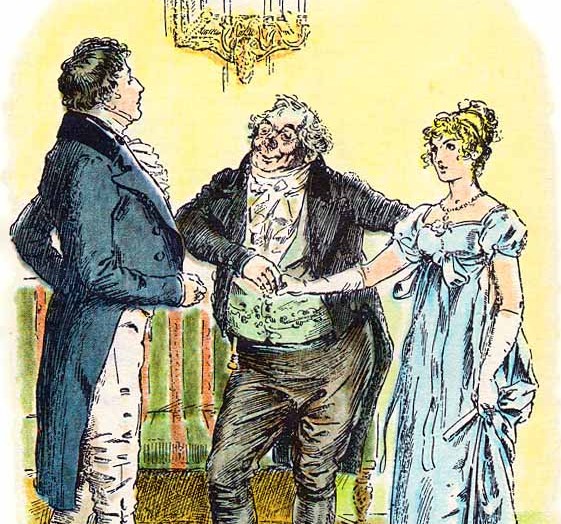 Mr Darcy really doesn’t help himself during the first assembly meeting with Miss Elizabeth Bennet when he tells Mr Bingley, within the lady’s earshot, that she is “tolerable, I suppose, but not handsome enough to tempt me”. His haughty behaviour and general aloofness at social gatherings also don’t endear him to the Meryton/Longbourn populace, but, as any Jane Austen fan knows, you shouldn’t judge a book by its cover.

As the story unfolds you realise that Mr Darcy has been sought-after by every high-born, eligible lady in the land for a number of years, he’s also rather shy, introverted and serious by nature, a catalogue of reasons why a public assembly in a new town isn’t going to be fun, or end well for him. As he arrives there are whispers around the room about his eligibility and his ten thousand a year which naturally make him withdraw behind his well-practised mask of sobriety; it’s all about self-preservation.

Mr Wickham, on the other hand, has all the appearance of goodness with socially polished manners, the ability to flatter with ease and is desperate to fit in and be accepted. At one of his very first meetings with Elizabeth, he privately spins the well-practised tale of his mistreatment at Mr Darcy’s hands by accusing him of failing to honour his father’s will, with nothing more than his own word as evidence. Elizabeth believes him instantly, because her pride has been injured at being referred to as tolerable, and because Mr Wickham is great at socially engineering situations to his advantage.

Elizabeth’s road to discovering the truth is long and painful to both hero and heroine. Her character prides herself on her ability to read people, but gets it wrong repeatedly because Mr Darcy suppresses his regard, and Mr Wickham is smooth and convincing.

Jane Austen’s original draft of Pride and Prejudice was titled First Impressions and it’s easy to see why, because first impressions really are important in shaping people’s opinions. That’s just as relevant today as it was two centuries ago when it was written. Times and methods may have changed, but people still fall for the same old tricks; be it a well drafted spam or phishing email, a charismatic stranger with malicious intent or that cold caller who claims to know something about your life in order to keep you on the phone to sell you something. Giving something attention because it looks appealing at first glance isn’t always a great strategy, and neither is turning down Mr Darcy due to one unfortunate comment and because you’ve been unjustly poisoned against him.