The Unique Mark Of The Signet

Home » The Unique Mark Of The Signet 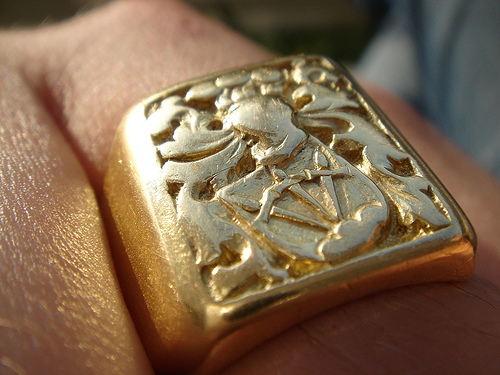 And then the words which I have said that you may send (someone) in order to confirm the validity of a sealing (made) with my seal, and that you may perceive that one has sent (someone already) for this confirmation, before I had asked (for it)

After a transliteration and German translation on the Thesaurus Linguae Aegyptiae website: Berlin-Brandenburgische Akademie der Wissenschaften

Signets rings are designed with a raised impression so that they can be used to leave a unique mark when pressed onto sealing wax or similar material. There is archaeological evidence to support the fact that signets were used in the earliest civilizations and have been traditionally used as a personal seal of an individual. The “Royal Seal” would identify the King’s authority and provided authenticity of a document held by the bearer. It also offered protection to the bearer of the document as harming the one who bore the kings seal was to harm and hinder the king.

Some of the most famous signet rings throughout history include Pompey (106- 48 B.C) which displayed a lion bearing a sword. The signet of Julius Caesar (100 B.C. – 44 B.C.) bore an armed Venus, whilst his grand nephew Augustus Caesar (63 B.C. – 14 C.E.) went through three different signets, the first bore a sphinx, the second had the head of Alexander the Great and finally his own image.

Perhaps the most famous modern-day signet is the one worn by the Pope which is known as the “Fishermans Ring”. The ring denotes the seal of the pope’s authority. It was traditionally used for sealing all of the pope’s official documents. The new unique ring is cast for each pope which is destroyed using a silver hammer or rendered unusable by applying a deep cut in the presence of other cardinals. Once a pope dies or resigns. This is to prevent fraudulent sealing of documents once a page is no longer in power.

Today the wearing of the signet and its authority is largely ceremonial. However, it does touch upon a number of modern information security practices. Whereas the signet may have been replaced by digital certificates, PKI, certificate authorities, IDAM products or other such technologies the underlying principles and challenges we face today are very much the same. When a user receives an email, a document, visit their website or download an e-book how can they validate the originator is who they say they are?

The second aspect illustrated more by the cardinals destruction of a signet is that of having a mechanism to revoke or invalidate an authentication mechanism once the individual is no longer authorized to use it. Does your organization revoke access rights once individuals move job or leave an organization altogether?

Whilst technology has changed many things in the world, it’s still does not change the fundamental human need of needing a robust mechanism to establish trust and determine authenticity of goods or information.