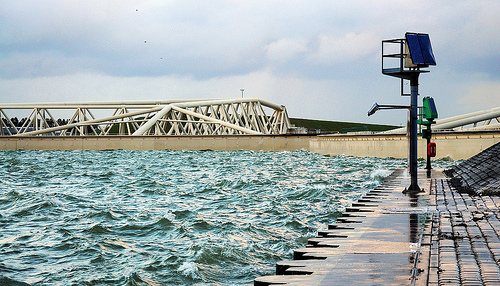 The Dutch have always had an intimate bond with water. But just like every other relationship it has not been without its bumps, ditches, and cliffs…

The night of Saturday the 31st of January and morning of Sunday the 1st of February 1953 have been engraved in the Dutch national conscience. A combination of a high spring tide and a severe European windstorm over the North Sea caused havoc to parts of the Netherlands, Belgium, England and Scotland. A perfect storm which led in some areas to a water level of more than 5 metres above sea level. Sea defences where overwhelmed by this tidal surge and caused extensive flooding. My country the Netherlands, with 20% of its land below sea level, was especially affected, recording hundreds of fatalities, the loss of many livestock and widespread damage to peoples’ homes.

We answered this tragedy with a sincere “Never again!” and the so-called Delta Works commission was installed to research and develop new measures to prevent such disasters in future. It even resulted in the Delta Law forcing future governments to keep risks of catastrophic flooding from the sea within acceptable limits and to continue upgrading our defences if required.

With incredible feats of engineering like the Eastern Scheldt storm surge barrier (the Oosterscheldekering) and the two-armed Maeslantkering storm surge barrier, engineers have reduced the risk to the required level. After 50 years of near continuous work, the original Deltaworks were formally declared completed in 1997.

However with sea levels expected to rise in the future and several large European rivers running through the Netherlands, the job is yet to be completed. And so the government has taken a different approach to river flood protection.

Just strengthening our river dykes would still result in floods, as the anticipated increase of rain and meltwater simply needs more room to pass. The Dutch Room for the River Programme has been put in place to do exactly that: give rivers a controlled level of freedom to cope with these higher water levels. Moreover, the measures are designed in such a way that they “should improve the quality of the immediate surroundings“.

As an Information Security professional you may be asked or feel obligated to batten down the hatches and prevent information from leaking out.

If those security controls are too strict and regardless if that is right or wrong, the dams you put in place could break and information will spill and overflow in an uncontrolled fashion.

In my opinion it is my duty as an Information Security Architect to create innovative and intuitive solutions that tweak the flow of information, as just like water, information is the lifeblood of any organisation.