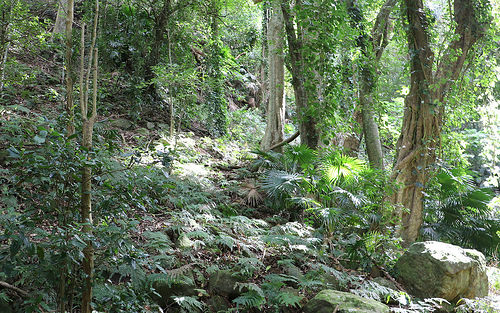 There is a place envisaged by Rudyard Kipling, where animals talk and a boy named Mowgli grows up as a cub, living in harmony with his surroundings. He had never learned to distrust strangers and he is unaware of Man’s Red Flower, Fire (walls). While he is still a cub not yet fully grown, let’s call him a teenager, he takes his first few tentative steps into the world. If we substitute jungle for online, Mowgli is about to experience every danger our children face as they venture into the world of the Internet today.

One day, in the season of drought, Mowgli is at the water hole under the water truce where all the animals respect each other and do not attack – a kind of a hippy view of the Internet that idealists would like. Mowgli is about to graduate from his local offline community on MyPack™ and register on the adult and more public JungleBook™. But there are bad people out there, liars, Cheetahs (sic) and of course predators. One particular predator who appears is Shere Khan, the ferocious Bengal Tiger. He knows he had a limited amount of time to attack the boy before he grows and learns how to defend himself.   Shere Khan appeals to his JungleBook contacts to give up the boy with a combination of threats and bad information in an attempt to discredit the boy, (a form of Trolling). In order to protect himself, Mowgli must leave his MyPack community and becomes anonymous. He sets up security around himself and takes on board a cyber-mentor in the form of Bagheera the Panther – a PetNanny if you will.   Bagheera is a great role model in life and is aware of the old dangers of the jungle, but is not an expert when it comes to new threats like those associated with JungleBook usage.   He realises he must get Mowgli to his own kind where he will be safe and where he can learn the tricks and tips to keep himself safe.

On his journey, Mowgli and Bagheera come across a number of characters or archetypes for risks that any teenager may face on their road to Internet wisdom.   The first of these is Kaa the giant constricting python.   Kaa is a social engineer, she is hypnotising in her lies and tries to seduce the young boy to make him fall asleep and then become easy prey for her to consume. She uses techniques of flattery and mimicry to show empathy with the boy. It is only the watchful eyes of Bagheera the Panther who pulls the snake from the tree and reveals the true purpose of Kaa’s interest. Mowgli is saved for now and learns a valuable lesson.

The next danger comes in the form of Baloo, a giant bear who is only interested in play and food, particularly Honey. His hedonistic lifestyle leads Mowgli to do things and go places he would not normally, (frankly his “bough”sing history is alarming).   He visits sites that Baloo suggests and Mowgli is encouraged to sample delights he never knew existed. Baloo himself is not aware of the danger that can be encountered when simply following links to unknown places.   Baloo talks of the bare necessities, but in reality it is Bagheera that is teaching the boy those necessities when it comes to his safety within JungleBook.   Bagheera steers him once more onto the path that leads to the flame of knowledge.

Our final danger across whose path Mowgli must cross is Louie the King of the Apes. In fact, he apes everything about man and he sees Mowgli as his path to becoming a virtual man. If he can get Mowgli’s knowledge he can become like him. He is in fact, an identity thief. He tries to empathise with the boy, like Kaa had done, in order for him to reveal his secrets.   But in the end, Mowgli with the help of his PetNannies (Baloo and Bagheera) manages to escape and finally ends up at the human village.

This however is not where the story ends. The boy Mowgli now sees himself as a man, and is given the enhanced privileges he sees are due to him. He learns the power of Man’s Red Flower or in the case of the Internet, unfettered access to the Web and the security settings on his PC.   Now Mowgli the innocent boy may himself become the enemy of his contacts on JungleBook™ as the power of fire, along with his new enhanced privileges, sees his world go up in flames; quite literally in this case.

The moral? Well, there could be many, but the main thing to remember is this is not a Victorian novel, but what is happening every day to our cubs and our third generation elders as they enter the online world. We need to teach from their first online baby steps about the dangers that exist, but also not be too quick to give away the keys to the kingdom.