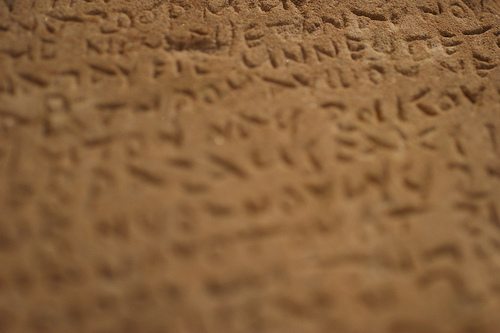 The city of Alexandria in Egypt was founded on the Nile River Delta by Alexander the Great around 331BC.  It evolved into a center of Hellenistic culture and civilization, remaining an important trading port and capital for nearly a millennium before the Muslim conquest by the Rashidun Caliphate in 641AD.  At its founding, Alexander had dreamed of a library for the city that was larger than the one he saw at Nineveh, but construction of the Library did not begin until after his death in 323BC.

While the namesake of the city hosting the Library was a man of war and conquest, Alexander left behind a closely trusted general, Ptolemy Soter I, who also had broader interests than just the military.  The Ptolemies raised Alexandria and its library to the pinnacle of human knowledge. It came close to being the repository of all knowledge at that time.

The Library was founded by the Ptolemies after the death of Alexander the Great, and quickly became a magnet for learning and knowledge. Historians generally agree that the Library was like a university with numerous auditoriums and lecturers. Writing and research figured prominently in the daily activities at the Library. Some accounts of the Library include descriptions of observatories for astronomers, labs for medical research, and orchards and gardens for botanists. Readers were treated to spacious reading rooms, with poetry readings and musical accompaniment. Ultimately no description of the Library of Alexandria would be complete without discussing the numerous documents stored there. The number of scrolls contained in the Library certainly exceeded 400,000 and by some accounts may have exceeded 900,000 or even one million.  At its height, the Library had multiple collections in at least two locations in the City of Alexandria.

The library was destroyed at some point in the distant past. In fact, history records more than one catastrophic event over the centuries of the life of the library. While the library recovered from the earlier events, and rebuilt the facility and restored the collections, the final event culminated in the complete destruction of both the buildings and the collections. In spite of the mystery surrounding the various circumstances of its destruction, there is no dispute regarding the loss of innumerable manuscripts which comprised the collections.

Preservation of knowledge in the ancient world was laborious and painstaking. In the centuries prior to movable type and the printing press, scribes had no alternative but to manually copy each manuscript. The loss of such vast quantities of human knowledge is made more profound by the understanding of how much effort was required to develop and preserve it. While undoubtedly some of the manuscripts in the Library of Alexandria had copies elsewhere, an incalculable number of manuscripts were irretrievably lost with the demise of the institution.

What might we know if the information contained in the Library of Alexandria was available to us today? How might we better understand antiquity, or humanity, if this information had been successfully preserved? What mysteries of the ancients would have been revealed by the large collections of manuscripts kept there?

The library would have been the ancient world equivalent of modern day Lexis/Nexis, Google and the Internet Wayback Machine all rolled into one. The institution fostered scholarship very much like a modern university or a corporate research and development center. The preservation of modern information, commonly referred to in information security as availability, has many parallels with the challenges and risks associated with preserving ancient knowledge. History provides many lessons on the difficulty maintaining information availability, and the tragic costs associated with failure. While the library had multiple buildings, they were generally recognized as being in close proximity, being virtually co-located in the same vicinity. This fact likely contributed to the final destruction of the collections. The duplication of information (making of backups) and protection of information (physical security) were substantial expenses in time and resources.

Modern stewards of information can draw on these lessons, using them to better attend to the issues and expenses related to duplication, transfer and protection of information and the facilities that host it.