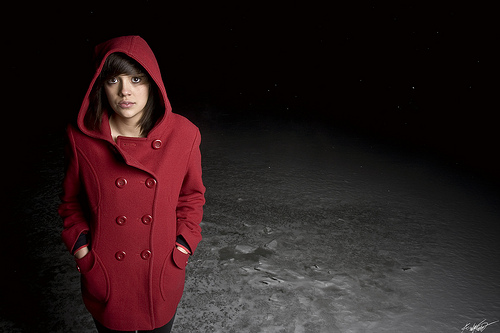 In this famous children’s story by Charles Perrault a young girl has to deliver some cakes to her grandmother. As she travels through the woods a big bad wolf sees her and decides that he would very much like to eat her.

After stalking her for a while the wolf approaches Little Red Riding Hood and questions her as to what she is doing and where she is going. Naively, the young girl tells the wolf everything.

The wolf easily convinces Little Red that picking some flowers for her grandmother would be a nice idea. Whilst she is distracted the wolf takes the quickest path to the grandmother’s house.

Pretending to be Little Red Riding Hood, the wolf mimics her voice and easily fools the old lady into letting him in at which point he then eats her up. The wolf then disguises himself as the grandmother and jumps into her bed.

When Little Red Riding Hood turns up a short while later the sneaky wolf raises the pitch of his voice and the unsuspecting young girl enters the house. Even though she thinks that her grandmother looks a little strange and questions ‘her’ at length she still joins her in bed.

The wolf eats her.

No lumberjack comes to save the day.

Little Red Riding Hood and her grandmother are both dead.

How would Little Red Riding Hood’s short life have been different if she had been more careful about the information she had shared so readily with the wolf?

And would we still be lamenting her passing if she’d stopped to consider why something about her grandmother didn’t seem quite right?