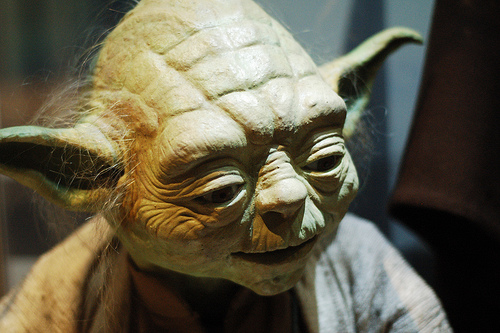 “Ready are you? What know you of ready?” Yoda, to Luke

We’re all familiar with many famous duos: Batman and Robin, Green Hornet and Kato, Lone Ranger and Tonto, Holmes and Watson, Kirk and Spock– to name only a handful. It’s easy to get into the mode of trying to be either the leader or the sidekick by asking ourselves, “Am I the main character? Or am I the sidekick? If so, what’s my particular role and who’s my partner?” In the cosmos of InfoSec, it’s better to think in terms of mentors and pupils, instead of playing “who’s the head honcho?” We’re all in this together, and we need to beware of making technology solely a “better-than-thou,” manager/employee ecosystem. It’s better to think of it as a cycle of “Who is my teacher?” and “Who is my student?” Better yet – “Who is my Jedi Master?” and “Who is my Padawan?”

Star Wars has plenty of duos — Jabba and Bib Fortuna; Lando Calrissian and Lobot; C-3PO and R2-D2; Han and Chewbacca. But a vital component of the saga involves mentoring. The Jedi didn’t have sidekicks, or loves, or even friends (all stemming from their rather monastic semblance), but rather mentors and, at the same time, pupils. Dooku mentored Qui-Gon, who then mentored Obi-Wan, who mentored Anakin, who later tries to mentor his son, Luke. And it gets quite tangled – Obi-Wan is replaced by Palpatine as Anakin’s mentor (after Anakin kills Dooku); after Anakin’s fall Obi-Wan later takes on Luke as a pupil, who then is involved in the death of his father. Yoda, being somewhat the comic mentor, seemed to train everyone to some degree.
We aren’t either a mentor OR a pupil – you should be BOTH a Master AND a Padawan.

“All mentors have a way of seeing more of our faults than we would like. It’s the only way we grow.” — Padme

In addition to our roles of Master and Padawan, we have to consider the character qualities we find in our self, our mentor, and our student. Are you on the dark side? Or the light side? I’m not attempting to split hairs with philosophies and religions, but I’ll focus on the universals. Are you teaching and learning to give, or to steal? Are you cheating, or playing fair? Are you out for yourself, or the community? Are you for good and law and order, or bad and deceit and chaos? According to a recent Fortune.com article (http://fortune.com/2015/12/09/salesforce-what-to-look-for-in-mentor/), a mentor should be both your greatest proponent AND your greatest critic. Are you helping others? Or trying to be Boba Fett?

The Jedi levels, from the beginner to advanced, are: Initiate, Padawan, Knight, and Master. You don’t have to be a Jedi Master to mentor someone. At its foundation, you qualify as a teacher if you’re one step ahead of your student. When it comes to being mentored, I like what Masaak Hatsumi, the founder of the Bujinkan Organization, purportedly said: “Start learning from zero, and there is no end to the number of techniques that will emerge.” If you’re an Initiate, don’t worry – it won’t take long before you’re one step ahead of others and can mentor them. The best in InfoSec are the Masters. Though it seems odd, Master is a title endowed by others, not given to oneself. The true Jedi Master really thinks of himself as an Initiate, and is always willing to learn. You can tell who the true InfoSec Masters by how they handle their title. Those Master Jedi polymaths are willing to let the Initiates be their Masters, and continue to follow the advice of Jedi Master Ralph Waldo Emerson: “”In every man there is something wherein I may learn of him; and in that I am his pupil.”