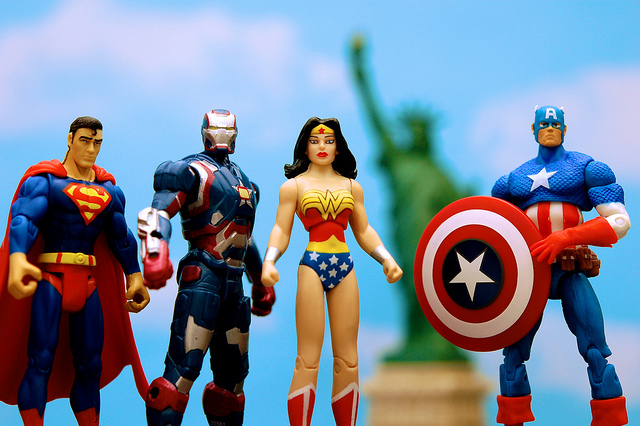 My name is Bennett and I am a Comic Book fan”.

There, I’ve said it. I have many t-shirts with super heroes on them – which, ironically, I usually wear hidden, under my shirt/jumper – figurines, DVD’s and of course the comic books themselves.

I have collected Comic Books since I was 9 years old. Unfortunately when my parents moved home my mother decided I had grown out of them and threw away a vast amount of my collection – with an estimated value of £40,000. No, of course I will never forgive her.

One of the appeals of comic books characters has always been their ability to hide their true identity. Superman is the most interesting of these as, unlike other characters, he was born as Superman (or to give him his real name Kal El) and so his secret identity was that of his human counterpart Clark Kent.

But why do these super heroes feel the need to keep their identity a secret in the first place?

The answer to this directly correlates with the necessity to secure all personal information.

In one particular Spider Man story, a ‘baddy’ discovered that Spider Man’s true identity was that of Peter Parker. He then found out where Peter Parker lived (if you saw my Channel 4 documentary How To Steal An Identity you’ll have seen how easy this is…) and threatened his Aunt and his girlfriend. The mantra in the Spider Man comics (and subsequent films) is “With great power comes great responsibility”. This responsibility does not only refer to using powers wisely but also the responsibility to protect those closest to you.

When I had my identity stolen, and subsequently lost everything, I was incredibly naive as to the power and control someone could have over your life even with the smallest amount of information. As in the case of these fictional characters (by the way it has really been a struggle to write the word ‘fictional’) so too can a fraudster not only damage your life but also the lives of those around you.

I have always liked super heroes who have some sort of disability to overcome. For example; Daredevil is blind, Iron Man has a bad heart, Professor X is in a wheelchair, Thor has a seventies hairstyle… And I have also been interested in their weaknesses – and, recently, in how these could relate to any weakness in our data protection system. For example, Superman’s weakness is Kryptonite, which I’ve always found odd as this is a mineral rock from his home planet, Krypton. Why would something to which you were once very close be so dangerous? To me, this is the reason some ‘phishing’ scams – especially those from banks – work so well. Your bank logo is something you recognize and feel comfortable with, which is why receiving an email from them immediately gives you a sense of belonging and trust. This is why so many people are taken in by the scams.

Keeping our identity a secret is paramount in the fight against the ‘super villains’ who could use it not only for their own financial gain but also, through appropriating fraudulent documents, infiltrate our security systems. If we don’t protect it or keep our identities a secret maybe the mad schemes to take over the world won’t just be the stuff of comic books. And, on a final note, if companies would listen to my campaign to stop sending out so much junk mail and pre-printed application forms then, well, that would be super…