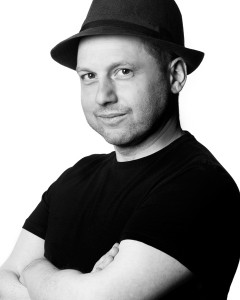 Bennett is an award-winning writer and stand up comedian and is the only Jewish/Welsh comedian on the circuit.

He has performed all around the UK as well as entertaining audiences in The United Arab Emirates, Italy, Australia, Germany and Hong Kong and he recently supported Ricky Gervais on several of his tour dates.

Bennett’s television and radio credits include; Loose Ends, Not Tonight With John Sergeant, Glee Time (in which he hosted a series of six stand-up comedy shows), Never Write Off The Germans (a panel game show for Radio 2) What’s The Story (a panel game show for Radio Wales) and he was recently a Presenter on Big Brother’s Little Brother for Channel 4.

He has written for many comedy programmes, including The 11 O’Clock Show, Commercial Breakdown and the BAFTA winning V Graham Norton. He also wrote most episodes of Genie in The House, the highest-rated children’s sitcom on Nickelodeon as well as the BAFTA winning Slammer for the BBC.

Bennett is also an internationally acclaimed speaker on the subject of Identity Theft. He was once a major victim of the crime and as a result lost everything and became penniless and homeless. Bennett, surprisingly, wrote a comedy show about his experience which was critically acclaimed at the Edinburgh Festival and led to him writing, directing and presenting the documentary How To Steal an Identity for Channel 4. In the documentary, he proved the ease of Identity Theft by not only stealing the identities of the general public but also stealing the identity of the Home Secretary. The documentary was Pick of the Day in The Guardian and The Telegraph described as “Fascinating and Disturbing” by the TV Times, and Bennett went on to be short-listed for a BAFTA.

Bennett is a past winner of both the TAPS Comedy Writer of the Year Award and the BBC New Writer’s Award, and is a past finalist of the BBC New Comedy Awards. However his proudest moment was coming third in an International Disco Dancing Championship in Tenerife.

“I love the idea of the Analogies Project and its ability to combine a serious issue with a more fun, approachable element. Anything which raises awareness over the issues of Identity/Fraud/Information/Security is important to me and this is a novel and unique angle.”