Stay out of Trouble

Home » Stay out of Trouble 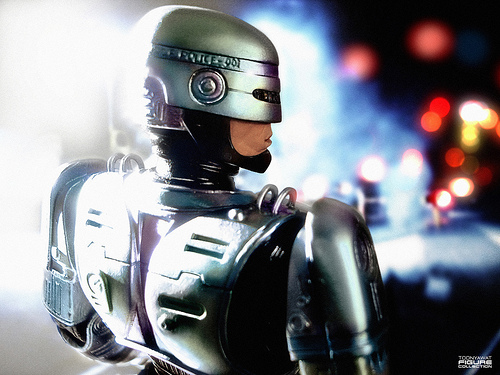 In the 1987 Paul Verhoeven film “RoboCop”, one of the central themes is the battle of Man made machine, and a pure machine.

The machine is the menacing ED-209, developed by the management, while RoboCop, was created by a young enthusiastic executive from the brain and organs of a policeman injured in action and completed in robotic parts.

Without giving away the plot to those who have not had the joy of this 1980s sci-fi classic, there are some faults with the pure machine ED-209, with fatal consequences. No one wants to see what happened there in a boardroom.

RoboCop on the other hand, has the feelings, memories and senses of a human and while not flawless, he outwits ED-209 on a physical and mental level.

Here, the board was presented with options that involved no human being in the process and one that did. Although on the first presentation, the RoboCop project was rejected because of the challenges posed of obtaining the “details” required. Also possibly because the young executive was overridden by the management due to his seniority.

In the world of IT, there are arguments for and against having a human involved in the process of making changes, applying patches and so on. Is it better to waste valuable manpower on such tasks when you can automate and leave it to a machine to take control of patch deployment?

Yes at home we may be satisfied with running an update while we take a break for lunch, or leaving the laptop overnight to download patches, but on a 10,000 user network it’s a different matter.

Can you expect staff to come in on a weekend for a patch update or server migration, or would you leave it in the hands of the machine to do overnight? As one pulled patch from Microsoft showed us this year, sometimes you need to be alert to what you are about to install and that is where the human brain comes into play.

In the film, neither robot policeman was especially flawless, but RoboCop demonstrated that with an ounce of common sense, the good guy prevails in the end. Sorry – another spoiler, but with two sequels, three TV series (two live action, one animated) and a remake due for 2014, surely you didn’t expect the machines to win?

Would RoboCop inspire you to scale the people out of the decision making process, or has another sci-fi classic warned you about leaving decisions and control in the hands of machines?

Whichever path you choose, don’t leave yourself with 20 seconds to comply.