Was Brian Clough the Greatest Security Manager of all Time?

Home » Was Brian Clough the Greatest Security Manager of all Time? 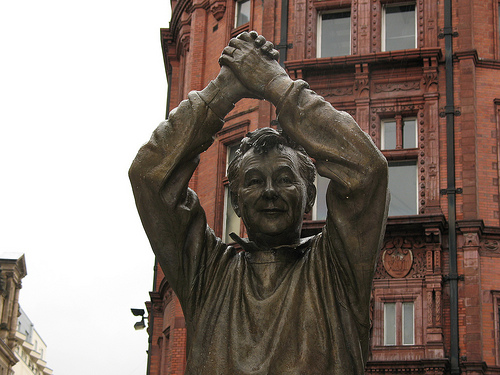 There have been a number of successful football managers: to name but two, Sir Alex and The Special One. Neither of them would ever be on my Christmas card list because of the club I support, but I cannot help but admire them . Their success over many years and with a number of clubs is outstanding.

Football managers are key to the success of a club – much as information security managers are to their organisations. They fit into an organisational structure. They report to a Chairman and Board and are responsible for preventing the failure of the team in meeting the club’s objectives.

So are good football managers and good security managers that different?

Let’s look at one football manager who stood out, not only because of his success, but also because of his personality: Brian Clough, or Old “Big ‘Ead” as he became known.

An outstanding player before his career was sadly cut short by injury, he then embarked on what can only be described as a colourful career in management.

His first outstanding success as a manager was with Derby County which he swiftly took from the lower reaches of the then 2nd Division to the 1st Division title. In doing so he laid out the blueprint of his approach. He shook Derby from the foundations, followed his convictions and had numerous controversies and disputes with the Board. But he brought success to the club.

After a final controversy, he left Derby County , had a brief spell at Brighton & Hove Albion, then took on the biggest, toughest and most controversial phase of his career where his approach to management failed, or perhaps was not given time to succeed. He lasted only 44 days as the manager of Leeds United before he was sacked.

This proved that a philosophy that will work in one organisation does not always work universally, particularly so where the organisation is afraid to change. That may well have been the case with Brian Clough and Leeds United. The irony of this chapter in his career is that Leeds United went into decline and ultimately stayed in the lower divisions for many years. They seemingly never had a plan for change.

Clough’s footballing philosophy was one of passing to feet and dribbling and it was wonderful to watch. He was not a fan of teams who played a direct style famously saying “If God had wanted us to play football in the clouds, he would have put grass up there.”

He moved on to Nottingham Forest, a club that at the time was regarded as unfashionable, and proceeded to take them on an amazing journey. He won the club promotion to the 1st Division as champions and then won an incredible haul of trophies, winning the 1st Division title at his first attempt, back-to-back European Cup successes and won the League Cup on four occasions.

He was forthright in his opinions and stood his ground when he thought something was wrong. However, his balance of humour and charisma meant he was respected by many of his peers in football. Even the press loved his unique character and he was also respected by his players.

When asked how he dealt with players who questioned his tactics and approach, his response was simply; “We sat down, he explained his point of view, I explained mine then we both agreed that I was right”

Now I am not proposing (based on that quote) that to be a successful security manager you need to be a dictator. What it highlights is the respect he commanded from his team, where he could have that degree of “banter” while still being successful in the task he was set.

He used colourful, humorous analogies to convey his message to players and fans alike. Even many years after his death, if you asked a fan from any club about Brian Clough, they would be able to deliver a famous quote. The challenge of getting the message across is a skill he mastered and one that all security professionals need to master as well.

He took his time to instil his beliefs in the club and the result was success. Even so, he did once famously say when asked how he got things done: “Rome was not built in a day. But there again I was not on that particular job.”

His legacy can be seen today with a number of his players continuing his philosophy. He is fondly remembered by football fans across the country.

Charisma, confidence, ability to communicate and assess a situation (an environment) and make radical changes (however unpopular) to achieve success makes a great manager – both in football and security.

Clough believed in his ability, his approach and his footballing philosophy. It is only fitting that the last word goes to him. When asked about his success he famously said.

“I would not say I was the best manager in the business. But I was in the top one.”